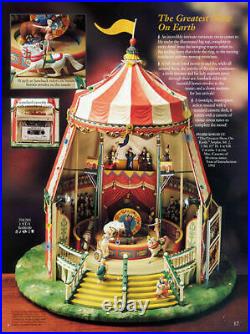 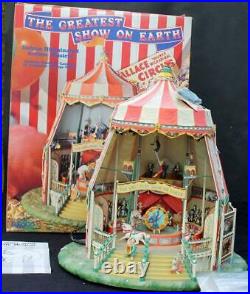 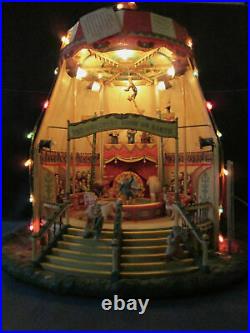 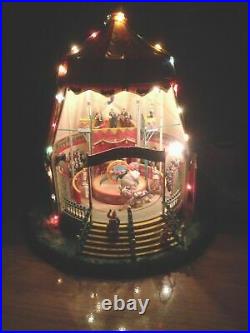 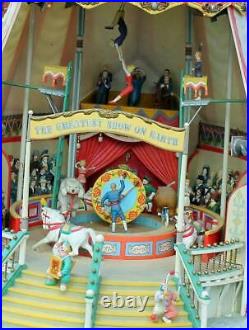 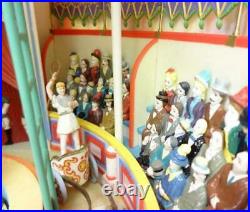 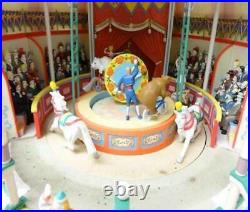 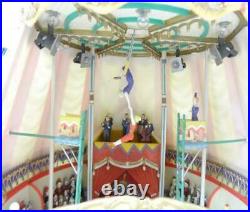 Although there is no mention of Barnum Bailey on this collectible, it is no doubt created by Enesco with approval in 1993. Wallace Circus as seen in the photo. Ringling brothers bought the Wallace Circus and other circuses in 1929. Wallace was one of many acquired. There was a huge disaster from a train collision with hundreds who died from the Wallace Circus. Ringling brothers Barnum Bailey bought them out. So this piece is even more historically significant. With the acquisition, the Ringling monopoly gained five more shows Sells-Floto Circus, Al G. Barnes Circus, Sparks Circus, Hagenbeck-Wallace Circus, and John Robinson Circus and became the biggest on Earth. In 2017 Ringling Brothers, Barnum and Bailey announced they are ending after 146 years. An era ending “The Greatest Show on Earth” VERY SCARCE For sale is “The Greatest Show On Earth” deluxe illuminated action musical from Enesco Small World Of Music series #591203. This is a used vintage (1993) item bought from an estate. The daring young trapeze artist swings back and forth while his assistant hangs on. Authentic replica billboards colorfully display a variety of famous big top acts. A happy clown turns, waves to passers-by and beckons them into the big tent. A beautiful white steed pulls a brave chariot racer around the action of the center ring. The audience marvels at at the wonderful spectacles before them. The knife thrower takes aim as his brave assistant spins on the wheel of death. Bears on wheels circle the ring while a lovely trick rider passes by on the back of a trotting white stallion. Lots of action in this intricate musical. · The clown moves on the front step. · The bears circle the ring on bikes while the girl rides around on the back of a horse. · The conductor raises his baton to lead the band and the front row of the band moves. · The trapeze artists swing back and forth. · Knife thrower and assistant on the wheel work. MUSIC: There is a tape player and cassette tape made especially for this unit with control switches in the back behind a false tent section. An a/c adaptor is included. A variety of victorian era calliope tunes play as the figures move. LIGHTS: The lights go on when the unit is switched on, although the bulbs can burn out. PACKAGING: This carousel comes in the original box and styrofoam packing. Mint Condition Comes with hag tags and instructions & extra bulbs APPROXIMATE MEASUREMENTS: · 16 tall · 13 wide base Only flaw it may need gentle cleaning from being stored. See the video, just copy and paste for youtube. The item “RARE Enesco THE GREATEST SHOW ON EARTH Circus Lighted Action Musical MINT VIDEO” is in sale since Tuesday, July 27, 2021. This item is in the category “Collectibles\Decorative Collectibles\Music Boxes”. The seller is “melodymeadow” and is located in Millbury, Massachusetts. This item can be shipped worldwide.