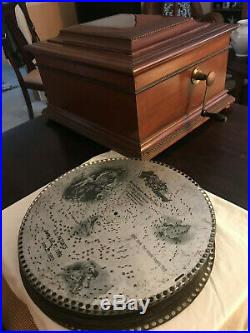 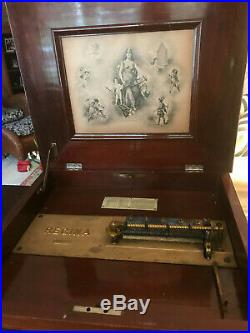 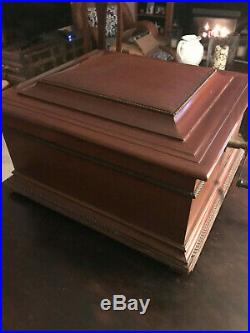 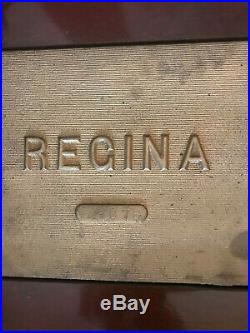 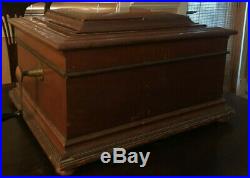 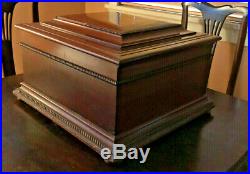 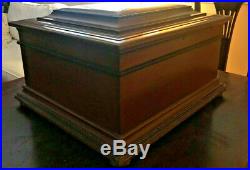 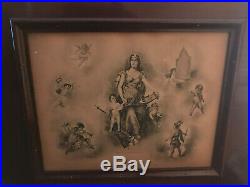 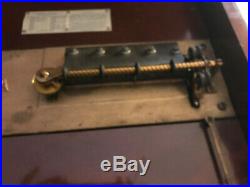 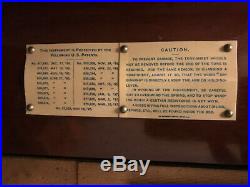 The Regina Music Box Company – Includes 23 usable 15 1/2 Discs — Fully Working. Size: 21″ width x 11″ height x 19 deep. Height with lid open: 28 1/2 tall. Includes: 23 – 15 1/2 disks of the following music. The Last Hope Melody. The Bride Elect March, Sousa. The School Marm March, Wells. My Country Tis of Thee. Nearer My God to Thee. Misenere from Il Travatore. Where the Apple Blossoms Fall. Til We Meet Again. The Sweetest Story Ever Told. The Bohemian Girl, Then youll Remember Me. The Moth and the Flame. La Fiesta March, Roncovieri. Also included: 1 disc that may need a small warp repair. We included as extra, but the title is: Still Night, Holy Night. Note that this statement is inside the print on the underside of the lid. The rest of the print (see photos) includes a stylized angel and surrounded by cherubs. Patent information on the horizontal disk playing surface says: “This instrument is protected by p 417,650, Dec 17,’89″… See photo for full patent listing information. There is also a “CAUTION” note from the Regina Company and instructions for how to use and care for the music box which is signed by and appears to have been made for the Regina Company by The Whitehead & Sons Company, Newark. The crank handle is working well, and detaches easily for storage. NOTE: This has been in one family since 1896, and belonged to my cohort’s great grandparent. There are a few scratches that can only be seen in the sheen of the finish. They look like they could be buffed out by an experienced furniture restorer. There are no gouges or serious marring that I’m aware of. There are a couple of piece of the molding that missing, though the wood in those areas is also finished, and matches in color and style. See photos as there is one taken from each corner and you’ll see those areas. Overall it’s in excellent condition, and testing disks showed it plays well, with good sound, especially given it’s age. It has a beautiful sound and the 24 disks should give you a lot pleasure for years to come. The mechanism is smooth and doesn’t even appear to need any oiling or other conditioning of the mechanism as something of this age might need. From Wikipedia on the Regina Music Company HISTORY. In 1889, Gustave Brachhausen, the foreman of the Symphonion music box company based in Leipzig. Created the polyphon Musikwerke in partnership with a Symphonion engineer Paul Riessner. Three years later, at the age of 35, Brachhausen expanded his enterprise to America by establishing the Regina Music Box Company. After sailing to America in September 1892, he leased some space in Jersey City. And with financing from Knauth, Nachod & Kuhne in Leipzig, Brachhausen set up shop in partnership with Riessner and Johannas J. Gradually, the movements were imported and assembled into American-made boxes. In a few years, Regina was manufacturing their products entirely in America, as Brachhausen accumulated patents. Regina established a nationwide distribution network by offering a 50% wholesale price to department stores and other retailers. He also lured one of Symphonion’s arrangers, Octave Felicien Chaillet, to America, where he composed and arranged thousands of discs for Regina. In 1897, Brachhausen patented an automatic disc changer, and Regina established a service for installing and maintaining their coin-operated music boxes. The company had 325 employees, and even as Symphonion established an American branch, Regina thrived as the market leader. Competition from the phonograph jeopardized the company in the early years of the 20th century, and in 1902, it dropped “Music Box” from its name and started to diversify. In 1903, Knauth and company overtook the company to protect its investment, relegating Brachhausen to factory manager. New products continued to flood the market from the Regina company, everything from player pianos to copying presses. Eventually, the company went bankrupt in 1922. The company introduced canister vacuum models in the 1930s. In the 1952, Regina introduced its more familiar stick model, the ElectrikBroom. During World War II. The company made bomb fuses. In the 1980s, CEO Donald D. Don Sheelens inventions cross the vacuum sphere from the basic vacuum cleaner to the steam cleaner. During the 90s, the Peanuts. The tools on board idea, cyclonic vacuum technology, and the modern easy to use steam cleaner were all the brainchild of Don Sheelen. The Regina Company was eventually acquired by Philips Electronics. Note this item, including discs, weighs around 70 lbs. The item “The Regina Music Box Company Includes 23 Usable 15 1/2 Discs – Fully Working” is in sale since Wednesday, April 22, 2020. This item is in the category “Collectibles\Decorative Collectibles\Music Boxes\Pre-1900″. The seller is “cowboybillybob” and is located in Seattle, Washington. This item can be shipped to United States, Reunion.