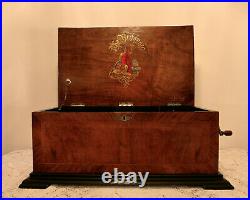 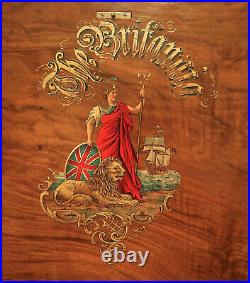 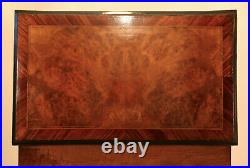 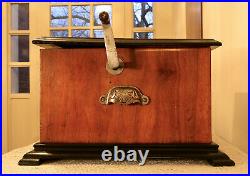 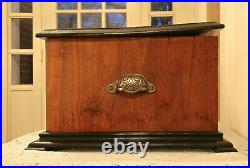 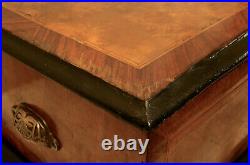 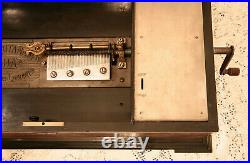 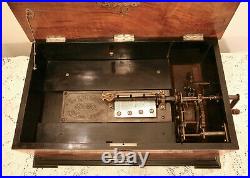 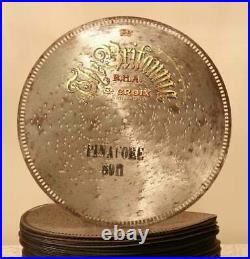 If you are a collector of musical devices, you may already be familiar with this wonderful antique music box, The Britannia. This is single comb playing and comes with 20 original 11+3/4 (30 cm) discs and a small carrying case. The entire walnut cabinet measures 25 x 16 x 9+3/4 tall. This comes with a brand transfer on the interior of the domed, veneered lid. The transfer is missing some areas while the cabinet lid incurred damage at some point and is warped at one corner see photos. This piece was taken to my furniture refinisher and he touched up the damaged wood veneer as much as possible. Upon close inspection, these repairs will be noticeable. I have included a photograph with the mechanism exposed. I do have another photo of the divider board with the on/off lever in place. I was able to get the music box to play by adding a few drops of oil at the right gear spot. If you are not familiar with these devices, you may need an expert to assist you in getting it into tip top shape from here. As an antique, I would say that this piece makes a wonderful impression and will play some long forgotten tunes included in this nice collection of discs. The sound is somewhat loud and brashy. Feel free to contact me with any additional questions or concerns. INTERNET INFO: Barnett Henry Abrahams? 1902 was English, with a sales network in London. The written accounts of his trade and trading associations vary depending on the reference sources. His sales were prolific and indicate he was effectively an agent for Ste. Croix maker(s) as well as a maker in his own right from 1895. Abrahams apparently started in partnership with a Marcus Newmark in 1866 and the firm had an address in London at 128 Hounsditch. The partners were joined briefly by another to form Newmark, Abrahams & Goldschmidt, ca. In 1885 he traded as Barnett H. Abrahams, as recorded in Trade directories. Initially, he appears to be mainly a London businessman and agent dealing in cylinder and disc musical boxes as well as a very wide range of goods, including silver. He may initially have commissioned items from Ste. Croix and possibly Geneva before 1895. This occurred when he established the B. Abrahams Company in Ste. Croix on 24th August 1895 in rue des Arts 3 & 7. Abrahams exhibited at the 1896 Geneva National Exhibition, including cylinder musical boxes with very large diameter cylinders (often referred to as’fat’ cylinders), up to 5.5 inches. It seems that there were few makers of this type and that they were an attempt to provide more high quality music at about 2.5 minutes per revolution, using the conventional pinning for the standard (about 2-inch) diameter movements. Several tunes could be pinned on a single turn. The Junod index of addresses of 1901 gives the address as rue des Arts 5, Ste. Croix, with a compliment of 58 workers. After his death in 1902 his sons, Joseph H Abrahams and Henri C Abrahams ran the business as Les Fils de Barnett H. Abrahams,’The sons of Barnet Abrahams’. Times were difficult and Henri left the business the following year, 1903. Joseph formed a new company on 24th June 1904 in partnership with Charles Cuendet called Britannia SA but this soon failed and was liquidated on 18th January the following year. The item “BRITANNIA MUSIC BOX circa 1895″ is in sale since Monday, February 8, 2021. This item is in the category “Collectibles\Decorative Collectibles\Music Boxes\Pre-1900″. The seller is “56dogdunit” and is located in Wilmette, Illinois. This item can be shipped to United States.